Hey, welcome to the third devlog, or sixth...!? Anyway you're probably wondering why progress seemed to go slower these... past months, now we can finally talk about this! We've been working for the past year alongside Chibig with this project, making two games in parallel hasn't been easy but we're trying our best to give both projects the attention they need! We're really grateful to them for giving us this chance and helping us keep ourselves afloat financially until we can launch another Kickstarter... and hey, by summer we'll be able to say we've worked on a released product!
https://twitter.com/chibigstudio/status/1488906701755539461

But you're not here for that, no! Let's talk about Genokids!

As per the previous poll, we began working on Yellow’s moveset! She’s such a fun character to work with and play as!
First, let’s talk about her role in the group.
Yellow’s moves are very slow and have a lot of recovery but she makes up for her lack of speed with the highest base damage of the team, most of her swings are also deliberately wide and circular, covering a lot of area around her, which will keep her safe while the hitboxes are active.

She’s still very WIP, her hammer will use the thrusters in its back during the attacks but no work on her VFX has been done yet!
Anyway, let’s go over her moveset thus far:
Her base ground combo is a 4 hit chain with the first hit being the fastest and the rest carrying on the inertia of the hammer, the final attack is a ground pounding move that breaks through enemy guards.

The air version is somewhat similar but shorter, she begins with a diagonal spin and ends with an overhead swing that can also break guards.

Lastly, her ground pound has her sitting on top of her hammer to slam down on enemies, it’s an animation we’re quite proud of as it really showcases her playful character!

As for her Flow Specials, she currently has one: Whack-a-Moron!
This move makes Yellow do a front flip and slam the hammer down, creating a small shockwave (to do ;) ), similar to her combo finisher, it also breaks guards, even better, you can repeatedly use it to flatten everything in your path!

Work continues but here’s a little preview at Hyper Yellow! 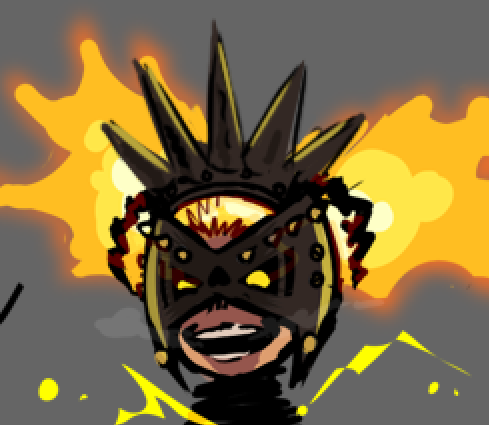 Speaking of Hyper, we’ve upgraded the transformation as well as changing some of the quirks of each character.

Activating Hyper will turn the Flow Specials into stronger variants, for example Red’s Rising Death will do three kicks instead of one, going WAY higher into the air.

Blue’s Razor Wings will summon twice as many blades.

But the Flows are not the only moves that change, oh no.
Hyper Red’s fists are constantly charged, which heavily increases his damage.

Hyper Blue spawns energy swords that shoot towards enemies with almost all of her attacks.

This cute enemy runs fast and you are its target! If you jump trying to get away you will be pleasantly surprised to see he jumps too! And best of all, when he gets close enough, explodes! But don’t worry, the only one damaged by it is you, he only gets exhausted for a short time until he recovers its strength.

The Genokids are too safe while in the air right now, but that has to change and Smiley isn’t the only one that will be able to jump, we intend to add this mighty ability to Bullies too so that you don’t get all cozy flying around free of all dangers. Nope.

We wanted for him to look a bit scary and one of the things that helped with that is having him stare at you intensely a lot, but there were some problems which are explained later.
Here's a comparison between the concept art and the finished 3D models, we really try to make sure the 2D art translates perfectly to 3D!

While we already had code to allow the Genokids to look at targets by rotating their head and eyes, when trying to reuse it for Smiley its limitations became obvious. Smiley has such a big head that with just a bit of rotation it ends up inside Smiley’s body. What we needed was the ability to rotate other body parts together with the head when looking at targets, like the neck and upper body and distribute the rotation needed along them.

This was more difficult than expected but, not only does it let the Smiley rotate its head way more than before (which makes it creepier, nice!) but also the Genokids look better when looking at stuff by feeling more natural.

Funnily enough this wasn’t the end of it as a new enemy (it’s not ready yet, will be shown on the next devlog) required not being able to look down. This type of restriction was supposedly supported by the new code, but of course it wasn’t! So half of it had to be rewritten again. Lots of math and real life head movement was required to uncover the core of this incredibly complex mystery: First rotate the head sideways as much as you can, then look up or down. Yes, that was all (except writing the code), but I wish I had done the head movements before programming anything because I was assuming a different way of looking.

To finish it off we tried applying it to the Droppy and Bully. Droppy opposed it (its body wasn’t ready) but Bully conceded, though only in moderation. This is yet another small detail, but they pile up to the point where all this juice together makes a big difference and is heavily missed when all of it is removed.

And as an extra, the same tech can also be used to simulate something similar to wind pushing (though that will need more work).

Thank you so much to all our patrons for their continued support, special thanks to: